Noticentral talked with professor Guy Greenwood, who explained us every single detail about shamanism and the espiritual connection with the Universe: about yage and philosophical beliefs. 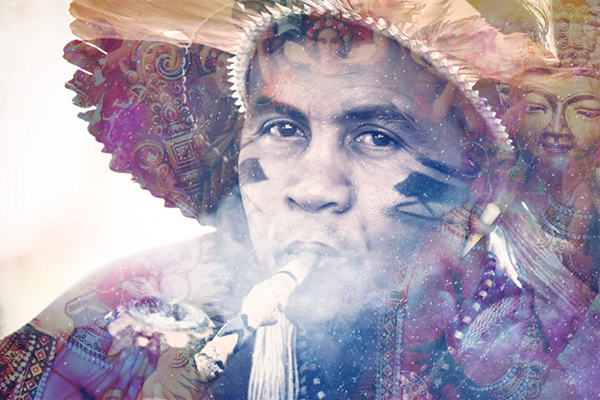 What is the relation between shamanism and other religions?

A lot. Most religions are based on or influenced by shamanism and in many religions there are hidden aspect of shamanism within them. Christianity has mystical elements influenced by Gnosticism; Islam has Sufism, Buddhism has strong shamanistic ties as well as Hinduism. Shamanism is a connection with other worlds which could be explained as dimensions outside of ours, it is a spiritual or mystical system to help people change or transform, like all the religions promote.

Some religions or sects are against shamanism because they see it as contrary to God. Within the catholic church they have instructions for priest to undertake to exorcise, therefore teaching and science on an esoteric level do exist within accepted religions. There have also been psychics in existence for millennia whom have had this ability since birth and within the catholic church there is acceptance for prophecy.

I think that shamanism or spirituality is something that everyone thinks about. I’m very interested in how man has his ideas, how he perceives the world he lives in, which is created by exposure to it, i.e. life,  thus exposure by defact is an influence; one of the biggest influences in the world is religion, and religions come from mystical practices, so, going back in time or to “source” you find that most cultures used mysticism or shamanism, which could be said evolved into religion. Thus, these early ideas must have come from a source and it is that which interests me. What divine energy was the impetus for those early ideas.

When you were in the Amazonas, what did you find?

There is a lot of shamanism in the Amazonas. It’s strong, however  shamanism is everywhere. The Amazonian people use yage for shamanism, and in different countries they use music, singing, meditation, yoga, breathing and different plants to enter into a trance like state to manage their affairs. I found the indigenous people have a different perspective of our reality.

Have you drunk yage? How was the experience?

Yes I have drunk yage.

Everyone's experience is different, because everyone's perception of the world is unique and that uniqueness is a personal language that yage will speak to you in. Yage communicates on many levels such as, images, feelings, thoughts, thought with words etc.

Yage has its own character, because yage is seen not only the name for a drink but as a masculine independent spirit himself. My experience is very personal so it is not something I will elaborate on.

When people drink yage they can start to enter a transformational process and they can understand things differently, or they look at life differently as the precess continues. Each person is unique and each experience as well.

Do you think that colombian people must have a closer relation with shamanism?

It’s a shame, if you have in your culture something very special, then in order to make your culture stronger, you must magnify elements of the culture and act on them for progression. This is evident in Italian art, if we look at painting from 1200 to 1570 we can see great change and beauty, because there has been a strong agenda to engage in art, which was called the Renaissance.

What culture does Colombia have that can contribute to the world? Europe is known for cuisine, art and sport. But Europe is much older. Yage is a cultural asset that has been intrusted to the indigenous people which is flourishing in good and bad ways outside of the indigenous community and going international. So I think that from a cultural viewpoint if yage is part of the culture then Colombians could make a concerted effort to embrace and look at or participate in something which is very old that has existed before religion and Europe and all Europe's cultural ability!!!!!

Every culture has different things in it and you can make your culture stronger if you concentrate on the positive and unique things in it. So, yes, Colombian people should look at shamanism, but they don’t have to be shamans; they can still pursue other religious or philosophical beliefs. A healthy society is an open one which allows diversity.

Colombians could turn their attention towards shamanism instead of the distraction like Facebook, McDonald’s, Whatsapp, which makes society work faster, but it doesn’t make it stronger.

What is the relation between shamanism and their territory, and how it works?

I think the shaman comes from a very unique perspective that sees the world very differently. If somebody says to me “you are in my country, you have to do what my country says”, I reply to him “yes, but you are in my world, so, why don’t you do what my world wants”. The shaman has his view which is at many times contrary to the views of the aggressive commercial sector and lifestyle choices of the populous, which the shaman has gotten from Mother Earth. The shaman looks at the world more objectively from a multidimensional, hyper dimensional, metaphysical stance. We forget that humans are part of the world alongside our other physical and non physical spirits companions.

In my view, generally most people try to segregate, we all have different languages, territories, countries.  Everybody is the “same”, in the sense we are energy, and that energy is God, so we all are God. We accept an illusion called individuality, although it is an illusion it allows us the chance to experience this world in infinite different ways, in order to learn.

However we could still learn our lessons on this planet more peacefully by accepting individuality as an important illusion. This illusion if not und causes a lot of problems and suffering.

On this earth we create polarities, like war, racism and sexism, and when you have these disparities it creates bad energy. When the indigenous people say it’s our territory, maybe it’s everybody’s territory, and maybe the people that want to go there, like people who look for oil or gas, should respect that it is everybody’s territory. Thier exploits are not in the interest of everyone. Some people like indigenous have more respect for the earth than other people, so maybe we should learn from them how to look at the earth, because they see the earth as a spirit, as a person, others as money and property to be abused.

We take things from her, but we don’t give anything back to her. Maybe the indigenous have something to teach us, and maybe we should be open.